NOTE BEFORE READING | This post includes holiday spoilers for kids.

A couple weeks ago (before Easter) Chris had "the talk" with Simon about some of the ways of the world related to the holidays. We had decided together it was time for him to hear it from us vs. from kids at school (whether well or ill intentioned). The talk went really well and I asked Chris if he'd be willing to write up the experience and if I could share it here. My hope is that it might help another parent as they navigate these waters with their kids. Obviously, every kid is different but the approach of becoming a "holiday helper" really seemed to resonate with Simon.

Since before this last holiday season of 2013 (Simon was 11), I have been concerned about how and when we were going to tell Simon the truth about those holiday icons, Santa and the Easter Bunny. You see, Simon has always been a true believer. And that kid has more Holiday spirit than anyone I have ever met. It is difficult to get away with cutting corners during the holidays with Simon. From advent calendars to outside lights on the house, there are certain things that you just do at the holidays....and he truly enjoys every moment and every tradition.

So you can imagine the angst as we had been anticipating how the conversation would go and how he would react. When we discussed it prior to last holiday season, we weren’t sure he was quite ready to make the leap in perspective...from one of innocent believer to one of being “in on the secret”. But it was clear that when he got into an argument with a sixth grade peer about whether Santa was real or not, that it would be time to let him know at least by next Christmas. I think he must be among the very last in his class to still believe. For many kids, it perhaps isn’t a big deal. But to Simon, truth is truth. He has always been a Santa believer and he is getting to the age where it could become another source of division between him and his classmates.

I talked with Tiff about this and she suggested approaching it by emphasizing that we were letting him in on a secret. She also suggested it would be an easier conversation when the holidays were way in the future, such as during the summer. I thought so too. Simon likes being “in the know” when others aren’t. He likes surprises. He loves giving surprises. He is good at keeping those secrets. In short, he is now old enough to join the grownups as a fellow keeper of holiday traditions and spirit.

Ali and I talked about it and agreed that this would be the year.

I decided to lay the groundwork with St. Patrick’s Day. When the kids woke up in the morning on March 17th, for the third year in a row, the Leprechauns had visited us in the night, making their usual mischief by turning over tables and chairs and leaving the house in disarray. What was different this year, was that after dropping Anna off at school, I let Simon in on a secret.

He just grinned when I told him that it had really been me that had turned the furniture over and pretended that it was Leprechauns. He actually thought it was pretty cool...both the trick and that he knew about it.

Fast forward to the week before Easter. I was in the hot tub at our local athletic club with both Anna and Simon. Tiff came to take Anna to the girls’ locker room to get changed so we could go eat dinner. Apparently Tiff had just seen the Easter Bunny walking through the lobby, so she and Anna hurried off to see if they could go see it. Simon wanted to see the Easter Bunny too but I suggested that Simon wait back for a minute while they went ahead. I don’t remember the exact order or wording of the conversation, but this is more or less how it went:

“Well, that is the same as with the Easter Bunny.”

Pause, pause, pause while I read his face as he is thinking – terrified that this could go very badly.

Pause, pause, pause....so far so good. No tears. No arguing. He’s clearly thinking. Wow this has to be a lot to absorb for such a strong holiday believer.

Pause, so far so good. If this keeps going this well we might as well rip the entire bandage off. I won’t bring up Santa but this could clearly end up with a discussion about the big guy.

And then started the questions.

“Wait, so when does the Easter Bunny hide the eggs?”

“Oh. But what about the Easter baskets?”

“That’s also grownups. We buy stuff for your baskets and then put them out early in the morning when we hide the eggs.”

“It’s a pretty cool tradition isn’t it? All the grownups having the same tradition to make the holidays special fun for the kids.”

“Um, what about Santa Clause? Is he real?”

Here we go....Leprechauns, the Easter Bunny.....they’re cute, but hardly the focus for weeks if not months prior.....but Santa....oh man that is where things could go really sideways.

“Well Simon, it’s the same with Santa. Santa is a tradition created by grownups so that all the kids can have fun at Christmas. Just like the Easter Bunny or the Leprechauns. It is a secret that the grownups have to make Christmas magical. And now you are old enough to be let in on that secret also."

At this point he again visibly grins and even chuckles as he puts all the pieces start to fall into place for him. Pause, pause, pause.

Then the grin fades to a brief look of concern as he poses the next question.

“Wait, will I still get presents?”

“But what about when we see Santa and tell him what we want for Christmas?”

“Well that is another grownup in a costume pretending to be Santa. You know how this year you were saying that Santa looked different than last year? And remember how Santa in Bend looked different than the Santa here in Eugene? That’s because they are different grownups in costumes. But since either Mom or Dad is always with you when you go see Santa we know what you ask for. Santa Clause is a great tradition that all the grownups around the world are a part of and we do it for kids at Christmas. And now you are old enough to be a part of that tradition. Pretty cool huh?”

“Mom and I talked about it last year, but we weren’t sure that you were ready yet to be let in on the secret. But this year, we think you are old enough to be a part of it and to be able to keep the secret yourself and to even help us. Now you can help and even be the Easter Bunny or Santa yourself! ..........Let’s go get showered up Simon so we can eat dinner.”

Then with a look of excitement he flicked his hand in the air (one of his signature moves) and declared, “Goodbye kids, hello helping holidays!”

And with that he grinned and seemed to stand a little taller as we walked to the boys locker room, where he continued to ask a few more questions about the tradition of Santa Clause... from the other side.

It went as well as I could have hoped. His heart wasn’t broken, and Simon still has the greatest holiday spirit of anyone I know. And now whenever he talks with us grownups about the Easter Bunny or Santa Clause in the presence of Anna, he includes a knowing wink. I love that.

Welcome to the other side Simon.

The image at the top of this post is from my 2011 December Daily® album. See more details here. 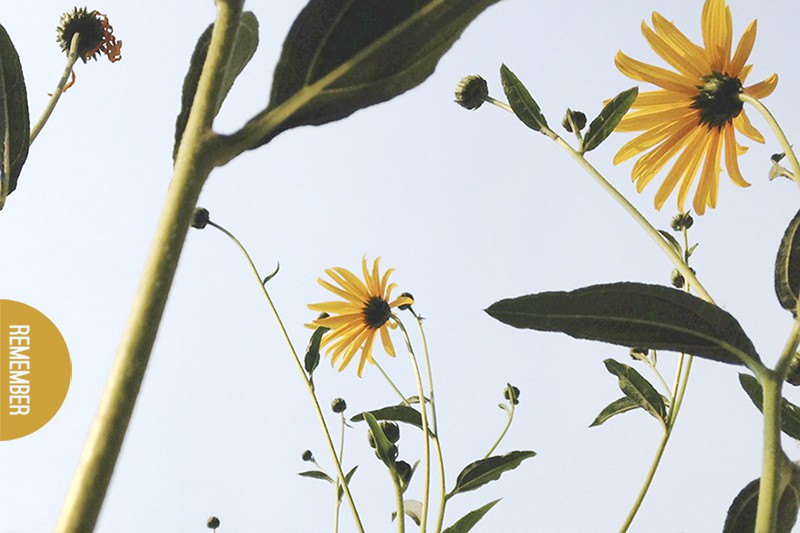 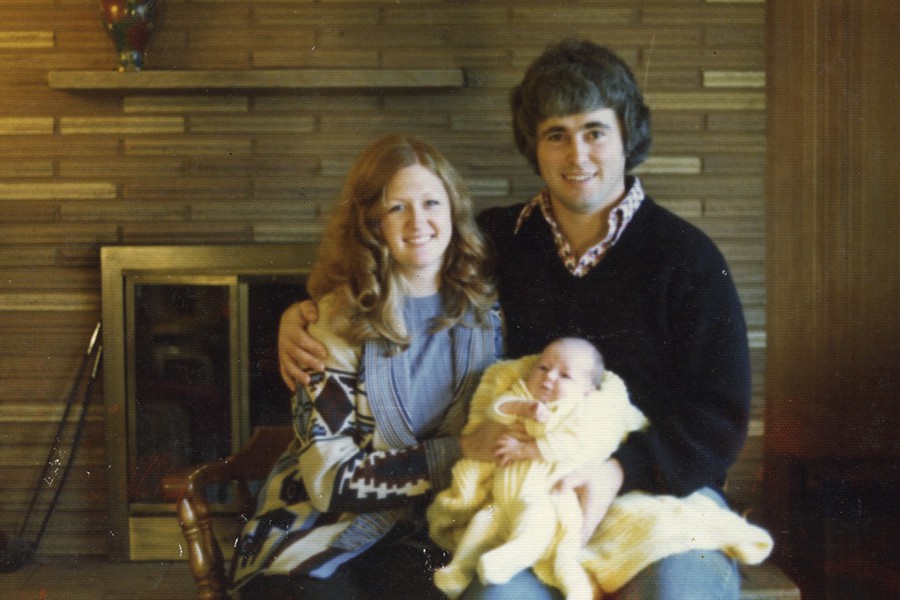 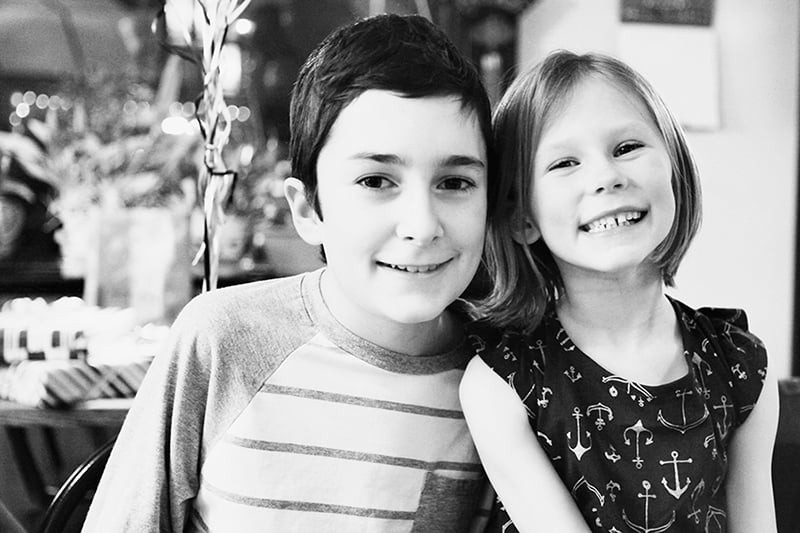