Today I am going to introduce you to the first half of my album and talk about what I did for the cover. Tomorrow I will post the second half of the images and a bit more explanation.

Something I stated last year should definitely be repeated again:

For me, this book is less about decoration and more about documentation. What that means is that when the time comes in December to add my words and photos I will not spend a lot of time trying to figure out what I want to add product-wise. I don't have any plans to spend more time each day than it takes to upload and print a photo (here at home), write up some journaling, and adhere it into my book (and maybe add one embellishment or a couple word stickers). I don't want this album to take up more time than necessary during the holiday season. Again, I want to be present and experience the season and do a bit of documentation as we go along.

I like to do documentation as we go along, rather than after the holidays, because I find that I have a tough time remembering what were the specific important or poignant or endearing or special parts of the day months after the fact (sometimes they are comments in passing or very simple things that end up meaning the most). Instead of "we went to see Santa today" I want the journaling to be more personal and real: how did Simon react, what was special about the moment, did he say anything silly or wonderful, what made it unique from last year, etc.


Those are the things I want to capture in this album.

As you will see below this is all about keeping it simple. Don't spend too much time deciding where to put the numbers or journaling blocks. Get it done. When December rolls around you will be working with what you have in front of you rather than starting from scratch. Making it work is a creative task in and of itself.

One of the questions I receive each year is how can you set this up in advance when you don't know what you will be doing on each day? This, for me, is part of the creative adventure. I create the album first and then format my content around the pages during December. If you look back through my pages from 2008 (see the full list here) you can see the before and the after to get an idea of some of the things I did with my foundation. WHY THIS ALBUM? One of the main reasons I went with this album was that I wanted to do something different from the last two years. I still wanted the flexibility of having a variety of different pages (textures, sizes, etc - and this includes some page protectors and canvas pages) and I was looking forward to the creative challenge of seeing what I would do with it.

After lots of thinking about what I was going to do, I decided to cover the album with fabric.

In my stash I had this cool linen/cotton blend piece with red berries that I ordered last year from Purl Soho. In looking at their site it looks like these are embroidered fabrics come from India and this color is available here (it's called Natural/Rust Branches).

To cover the album I used a product called Wonder Under

which allowed me to iron the fabric directly onto the canvas album. Easy. Before covering the album I removed the grommets (the little metal circle pieces that held the ribbon) with small pliers.

Before covering the interior with fabric I made sure to punch holes where the new grommets would be placed (in the same original location). If you don't punch the holes when you can still see them it is a bit challenging to get them in the right spot. New grommets were set after the album was covered inside and out. If you are interested in working with the canvas album but not interested in covering it with fabric I saw a cool version that Amanda created using stars and Scarlet Glimmer Mist.

Once I had the cover done I was ready to tackle the inside. One big difference from year's past is the inclusion of more page protectors. Last year I did a couple pages with divided page protectors - this year there are more. In addition to the pages that come with the album I also found that some old KI Memories 8x8 post bound page protectors fit just right.

THE RINGS : One thing I really wanted to try with this Prima album was to see if I could use rings instead of the ribbon that comes with the album. I was able to use 2.5 inch metal rings (in some of the photos below you will see where one of them is open - need to replace that with a new one) through the grommets.

After figuring out that the rings were going to work I decided to put eyelets in the holes of the pages I was creating (the ones that come with the album already have them in place). The Crop-A-Dile worked like a charm for setting all those eyelets. DAY ONE : Merry Christmas foil from Papier Valise (you can find it on page 3 of her paper section - you get a bunch of them that you can share with friends or use on other projects) is placed inside a page protector. To keep it in place I ran it through the sewing machine with red stitching (I did red stitching for the entire project to keep it simple). The content for the day will go above, leaving the part with the Merry Christmas foil see-through into the rest of the album.

I will add a number one to the photo when I document the day. DAY TWO : Metal 2 from Tim Holtz. This page is an 8x8 page protector that came with the album with part of an 8.5x11 baseball card page protector trimmed down and slipped inside (when trimmed there are 6 pockets). Basically I cut off the top row of pockets and the part along the side where the holes are located. There is an example of a page like this in the December Creating Keepsakes magazine. DAY THREE : Red envelope from Paper Source. Red Circle Number from Every Jot & Tittle. Scalloped edge along the top of the envelope created with the Fiskars Apron Lace border punch.

I like that there are some things I have used every year like these red circle numbers. DAY FOUR : Red Galaxy Stars from Prima. I stapled four on the front and four more in the same location on the back side of the page protector. The photo or journaling will slip into the pocket alongside the stars. I may end up stitching a vertical line alongside the stars once I have the rest of the content in place. DAY SIX : I cut down a file folder and wrote the words "cover with a photo." I tried to leave myself a few pages that will be entirely photos with journaling on top since I ended up wanting more of those sorts of pages last year. Gold with white dots paper is American Crafts. DAY SEVEN : For the canvas pages that come with the album I decided to create pocket pages by sewing pieces of Hambly overlays on top. Small Enjoy card is from Banana Fish Studio. Circle 7 is a rub on from October Afternoon. I stitched transparency overlays to both sides at the same time with my machine (creating a pocket on the front and the back). DAY EIGHT : A small "merry" card from Elles Studio was stitched to the outside of a page protector. The number "008" was already on the card. DAY NINE : Pages from other minibooks make great pages for your December Daily. In looking though my stash of minibooks I grabbed one of the clear acrylic ones from Clear Scraps (8x8). I used my trimmer to cut a bit off the edge (removing the holes) and then used the Crop-A-Dile to punch the holes. DAY TEN : Green glitter music pattern paper from Making Memories. Fa La La letterpress card from Paper Source. Small blue rub-ons from Jenni Bowlin. This is one of the easiest ways to create pages - adhere pattern papers back to back and punch holes for the binding. DAY ELEVEN : Pink Paislee canvas tag machine stitched on top of a page protector. "11" stamped with Studio Calico Noah alphabet stamps and black Staz-On ink. The content for this page will likely be a new page behind the page protector (like a full page photo). DAY TWELVE : Another canvas page where I created a pocket by machine stitching a Hambly overlay right onto the canvas. Red calendar is from Jenni Bowlin.

This is part of a series of posts on creating a December Daily album. All posts for 2009 can be found here. 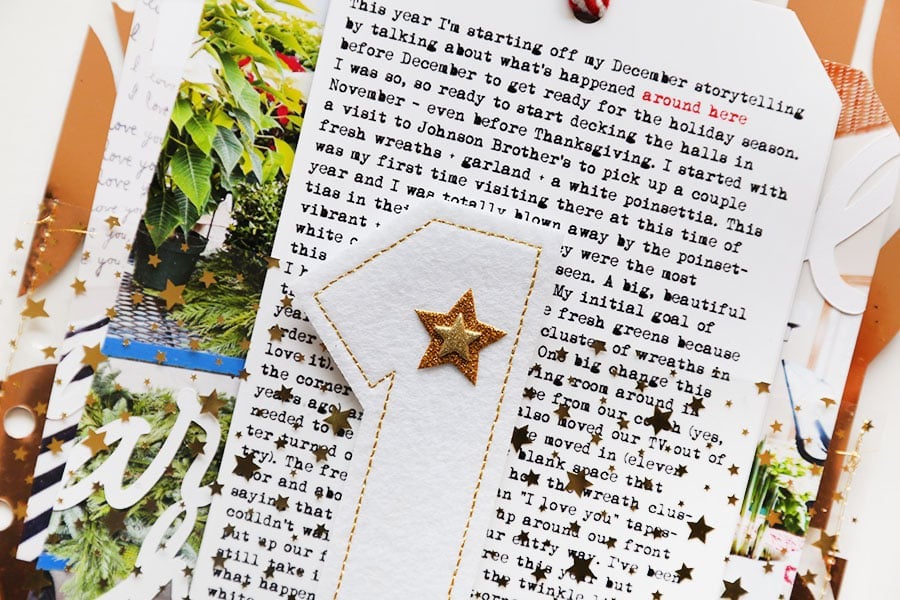 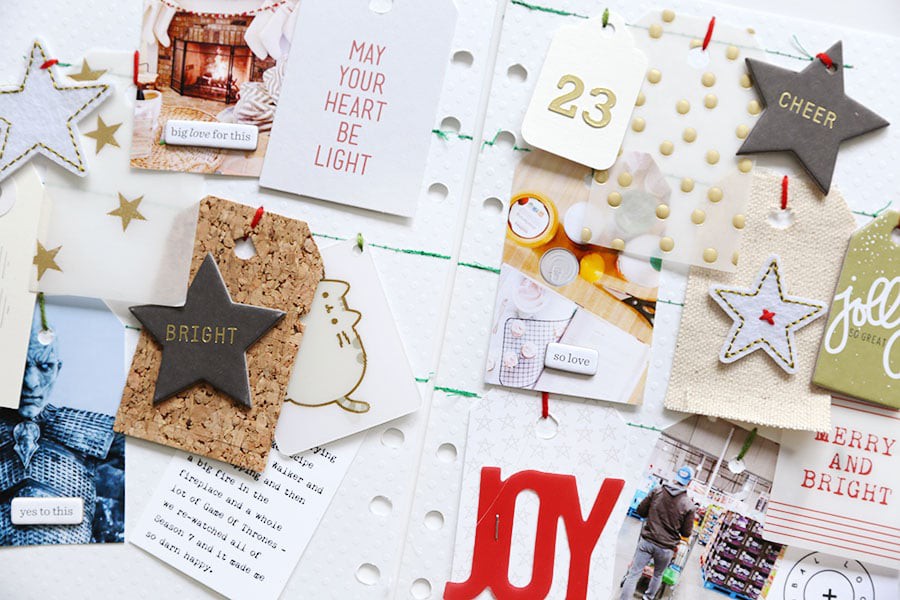 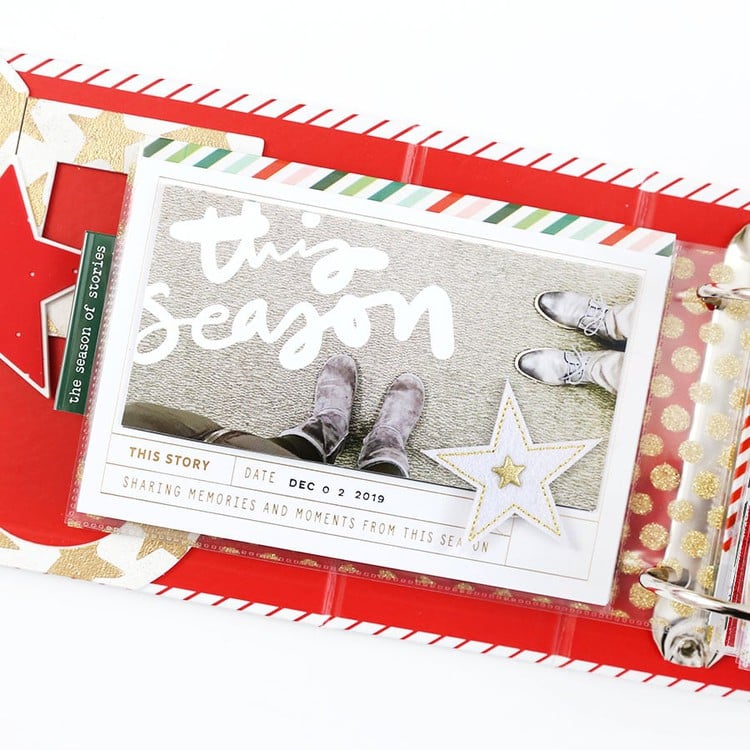